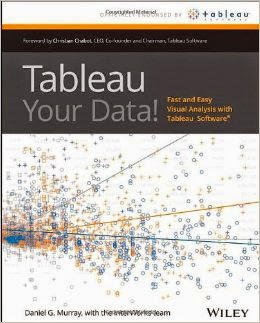 
Tableau Your Data! by Daniel Murray (from Amazon.co.uk) is a comprehensive introduction to Tableau for users at all skill levels. Covering the business case for visual analytics and identifying some of the shortcomings in traditional business intelligence applications. Daniel Murray covers the spectrum of Tableau topics including: Tableau Desktop workspace; data blending and joining; developing custom calculations; Tableau Server Installation and Automation; and somes case studies from his client base.

The inclusion of a follow along work book (downloaded from http://tableauyourdata.com/downloads/) provides a great hands-on approach to learning the data and allows the reader to get a better understanding of the concepts that are being passed on.

This wide coverage is probably the biggest downfall of this book in my opinion. In trying to cover the two major components of Tableau (desktop and server) in the one book it has the potential to confuse or disappoint, depending on if you wanted an introduction to desktop or server. The book is delivered in three parts, Part I – Desktop, Part II – Tableau Server and Part III – Case Studies. As I see it, however, if a person is reading the book for the introduction to Tableau Desktop, which is the strongest part of the book, why would they need to know about Tableau Server deployment and tabadmin commands? Isn’t the introductory level implying they are an individual person wanting to develop and improve their initial Tableau experience? Then for someone who wants more information surrounding Tableau Server the information is so lightly touched that what is available is mentioned to the point of ‘yes its there and you can automate repetitive tasks’ but to get any real insight into a larger Tableau Server deployment (which will require at least 10 or more people and that implies someone is past the introductory stage) you need to look elsewhere for the information.

The Crux is that I think this should book have been split into two separate books. the first book with covering Tableau Desktop with Case Studies. This would could almost just be a reproduction of Parts I and III. The second book would require some more development and expansion of the Tableau Server offering with more specific deployment and troubleshooting case studies. This would allow more depth in the configuration, deployment and typical troubleshooting process involved in both the initial Tableau Server deployment, the scale up and out process (when to do it and identifying when it is required), and the ongoing tasks associated with a Tableau Server deployment (backups, updates, version management et cetera).

In the end I do think Tableau Your Data! is a very good introduction to Tableau, the capabilities available and introduces some of the key resources (the community forums, Tableau Public and the Zen Masters).
3 Stars

1 thought on “From Zero To Visual.”